The cost of dent repair services in the queen city can be greatly reduced with the help of new technology and tools. Paintless dent repair remains one of the most effective ways that you can fix damaged bodywork as a result of hail damage and more.

There are a number of potential reasons why you may require repaint services for your vehicle in the event of a small collision or even a hail storm. Using traditional methods you could be forced to get your vehicle into a body shop for several days and completely remove body panels in order to repair dents. With the help of Piedmont Dent Repair in Charlotte, you can enjoy a much more affordable cost for keeping your vehicle in tip-top shape.

Keep in mind that only certain types of damage can qualify for paintless dent removal. This type of service is best suited for minor damage like hail dents and small bumps with your vehicle. 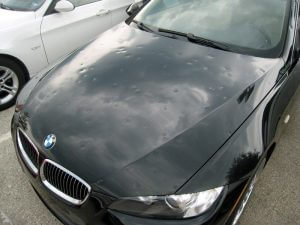 Piedmont Dent Repair in Charlotte North Carolina is available to take on all of your auto dent removal needs. We specialize in a paintless process that can preserve the value of your vehicle and could help you avoid extra costs associated with handling repairs through your insurance company. Don’t let your premiums rise and get timely repair services with our staff.

Through our mobile service we can perform your dent repair in a timely manner. We will come out to your office or even your home to assess damages and give you an instant quote. Our services are industry-leading and we offer highly competitive pricing on body work.

All of our work is backed by a satisfaction guarantee. We want to make sure that our customers can have access to the best services, and this means standing behind everything we offer. If you are unsatisfied with the work that our staff performs, we can correct it at no extra cost to you.

Contact us today for a free quote on your paintless dent repair.

Charlotte is the most populous city in the state of North Carolina and is the county seat of Mecklenburg County. The city is nicknamed the Queen City and is named in honor of a German Princess, Charlotte of Mecklenburg-Strelitz who was the queen consort of Great Britain in 1761. The area that is nor Charlotte was settled by early Europeans by 1755. It was incorporated as the village of Charlotte town in 1768.

For higher education there are several notable institutions in Charlotte including; University of North Carolina at Charlotte, Johnson C Smith University and Queens University of Charlotte. UNC is the biggest university in the city offering a wide range of courses including nursing and engineering.

By the 19thcentury numerous churches had being established in Charlotte including; Presbyterian, Baptist, Methodist, Episcopalian, Lutheran, and Roman Catholic which earned the city the nickname of the “the city of churches.’