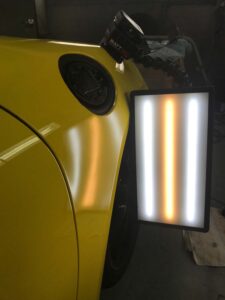 If you’ve ever driven down the street and seen a car with a huge dent in it, you may have wondered how that person could let that happen. Surely, they must know how important it is to repair car dents as soon as possible. But the real question is, is dent repair necessary?

A car dent is a small, usually round indentation in the metal of a car. Dents can occur for a variety of reasons, but the most common cause is hail damage. It can also be caused by flying debris (rocks, gravel) on the road, door dings from other cars, or accidental bumps from shopping carts and other objects. While most dents are minor and do not require repairs, some dents can be severe enough to cause crumbling or breaking of the metal, which may require professional repair.

5 Reasons You Should Repair That Car Dent Sooner Than Later

If you’ve ever had a dent in your car, you’ve probably wondered if it’s worth getting it repaired. After all, the repair process can be expensive and time-consuming. But is a dent really that big of a deal? The simplest answer is YES. Here are five reasons why it’s important to repair car dents:

If a dent is left unrepaired, it can eventually lead to rusting. A dent that rusts can cause extensive damage to the metal of a car. The rust will slowly eat away at the metal until it becomes a hole. If this hole is not fixed, it can cause the metal to break, and the entire car structure may collapse. Many people think that if they just spray paint over a rusty spot on their car, it will be fine. However, this is not true. The paint will only cover up the rust, and it will continue to eat away at the metal underneath.

While dents may not seem like they would significantly affect your car’s resale value, they can actually decrease its worth quite a bit. Most people want their vehicle to look as good as new and are willing to pay less for one with visible damage. In fact, studies have shown that cars with dings and dents can fetch up to 20% less than market value when it comes time to sell. So, if you’re thinking about selling your car in the near future, it’s best to take care of any cosmetic damage beforehand. This will help you ensure that you get the best possible price for your vehicle.

3. Dents can cause other problems

Car dents can often cause other problems beyond just the cosmetic issue of an unsightly dent. Dents can weaken the structure of your car, making it more susceptible to collision damage and even total failure in a crash. It can also interfere with the smooth operation of doors and windows, and cause problems with alignment. Additionally, if the dent is big enough, it can disrupt the car’s aerodynamics, which can lead to poor fuel economy. All of these issues can create major problems down the road if left unaddressed. So, it’s best to get any dents fixed as soon as possible!

4. Dents can be dangerous

Dents in a car can pose serious safety hazards. For example, a dent in the side of a car can create an air pocket that affects the airflow and reduces the effectiveness of the airbags. Dents can also affect how well a car handles in bad weather conditions or while driving at high speeds. If a dent is located in the path of your windshield wipers, it could eventually cause the wipers to become damaged or even break. This could then lead to decreased visibility while driving, which could be extremely dangerous.

5. New dents are easier to fix

This is because the metal is less stressed and therefore can more easily be shaped back into its original form. Additionally, the paint on a new car is less likely to have been damaged, so there is less risk of doing further damage during the repair process. Of course, there are always exceptions to this rule, so it is always best to consult with a professional before proceeding with any repairs.

Professional Dent Repair Near Me

Professional dent repair service also offers a warranty on their work. This means that if something goes wrong with the repair, you can get it fixed for free or at a greatly reduced cost. With their expertise and experience, you can rest assured that your car is in good hands and that the job will be done right.

Some people attempt to repair their own dents or their friends and family members. However, this is often unsuccessful, as it can be difficult to match the paint colour and finish of the surrounding area. If done incorrectly, an amateur dent repair job can actually end up costing more in the long run. It is much better to leave it to the professionals who have the experience and know-how to do the job right the first time.

Minor car dents may seem like no big deal, but if they’re not repaired quickly and properly, they can lead to bigger (and more expensive) problems down the road. That’s why it’s important to schedule an appointment with a skilled auto body technician as soon as you notice a dent in your vehicle. At Piedmont Dent Repair, we have years of experience repairing all types of car damage, so we can get your vehicle looking and running like new again. Contact us today to schedule an appointment!