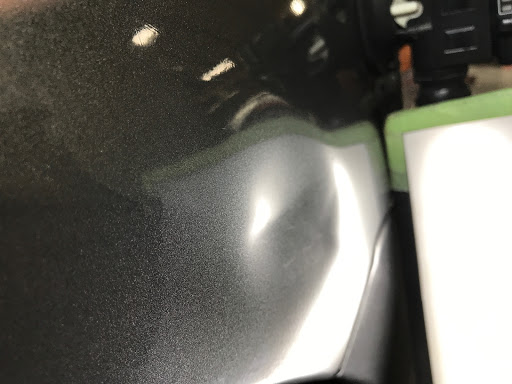 If you have ever had a dent in your car, you know it can be annoying. You may not have the time or money to take it to a mechanic, so you are left with two options: try to fix it yourself or live with the dent. If you choose to try to fix it yourself, you may be wondering if paint-less dent repair is an option. Does this method damage the paint on your car? Let’s explore this question and help you decide if paintless dent repair is right for you!

First of all, you must not attempt to DIY. Paintless dent repair is when the dented area is massaged until the metal pops back into place. This method does not require any paint or tools, making it a popular choice for those who want to avoid damaging their car’s paint job.

However, while this method is less likely to damage your paint job, it is not without risk. If you are not careful, you could damage the paint even more. Therefore, it is essential to take your time and be gentle when using this method.

If you are unsure whether or not paintless dent repair is proper for you, consult a professional from us here at Piedmont Dent Repair. We will be able to help you decide if this is the best option for fixing your dent and will walk you through the process so that you can avoid any damage to your car’s paint job.

Now that we have answered whether or not paintless dent repair damages paint jobs let’s explore some of the benefits of this method!

Some of the benefits of choosing paintless dent repair include:

-A quick and easy process that anyone can do

-The ability to fix a wide variety of dents

If you consider fixing a dent in your car, we recommend exploring all of your options, including paintless dent repair. This method is less likely to cause damage to your paint job, but it is important to take your time and be gentle when using it. If you are unsure whether or not this is the best option for you, consult us because we will be able to help you make the decision.

Can PDR be used to repair a dent?

If your car has a nasty dent, whether it’s a parking lot scar or an accident dent, there’s a good chance it can be repaired with PDR. Piedmont Dent Repair’s dent repair experts can repair most minor dents as long as the paint is still intact and the dent isn’t too complex. Because paintless dent repair can remove 80-90 percent of dents, it is the most effective way to remove a dent from your car.

We can often use the Paintless Dent Repair process to massage the dent out if we can get to the area behind the dent. The best part about PDR is that we don’t need to add body filler, repaint, or even disturb the factory paint on your vehicle during the repair process. As a result, PDR takes far less time than traditional dent repair, which involves sanding down a body panel, applying body filler, and repainting the panel.

Shapes of Dents That Can Be Repaired Using PDR

Everything is distinct in some way. No two vehicles are the same shape, and no two objects or other vehicles that may cause damage to your vehicle are the same shapes. As a result, we see a wide range of dents in various shapes and sizes.

“How does the shape of my dent affect its ability to be repaired with the paintless dent repair process?” you may wonder. ” – It’s a long answer, but it’s essential in terms of repairability!

Assessing the complexity of the dent itself is an important part of paintless dent repair and determining if the process can repair your dent. A more complicated dent is more difficult to repair. There are several factors to consider:

The Dent is squeezing

If the dent is creased, it may be impossible to repair with PDR. Even though many skilled PDR technicians worldwide, creases make restoring the body panel to its original shape difficult. Squeezing a pop can or bottle is a good example of dent complexity and how creasing affects dent repair.

Consider it this way. When you squeeze a pop can or bottle, it makes a dent. If the dent you make is round and smooth, you should be able to manipulate the can or bottle with your hands and easily squeeze out the dent to return it to its original shape.

However, if you crease the can or bottle when you squeeze it, a ridge will always exist no matter how hard you try to pop the crease out. You can fight the dent and the crease all you want, but it will seldom return to its original shape.

The same logic applies to your car. Although different materials are frequently used, and automotive paint has varying properties and elasticity, a round dent is easier to pop out, while creasing makes it difficult.

Most PDR technicians have specialty tools to remove dents with mild creasing; however, these dents must usually be repaired with the traditional dent repair process because the paint must be disturbed, and body filler must be applied. In some extreme cases, the panel may need to be replaced entirely.

The Size of the Dent

The paint’s elastic limit on your vehicle will also be a deciding factor. Automotive paint can only flex so far before cracking. The elasticity of paint varies from one automaker to the next. Some vehicles’ paint has different thicknesses and additives that allow it to be more flexible, whereas others are more brittle. A vehicle with more flexible paint can withstand a deeper and more complex dent without cracking, whereas a vehicle with more brittle paint and a harder clear coat cracks more quickly when damaged.

Before repairing your vehicle, PDR technicians are trained to look for stress cracks and other signs that the damage may have exceeded the paint’s elastic limit. If the paint is cracked, your panel will need to be repainted, and the traditional dent repair method will be required. Then, it’ll be time to take that dent to us at Piedmont Dent Repair!

We hope you found this comprehensive guide to paintless dent helpful repair and that it answered many of your PDR-related questions. We want to make sure you’re well-informed about vehicle repair so you can understand how PDR can repair your vehicle without breaking the bank. It truly is one of the most effective methods for removing a dent from your car.

Piedmont Dent Repair goes above and beyond to make sure your dents are repaired quickly and painlessly. We treat each customer’s vehicle as if it were our own, and we strive to provide the best workmanship and quality with every repair that we complete. That is the Piedmont Dent Repair advantage, and it is how we deliver quality that our competitors cannot match. So visit Piedmont Dent Repair today for a quote if you want your vehicle repaired by true professionals to look as good as the day you drove it off the dealership parking lot.